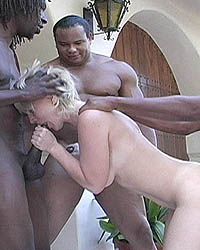 Petra @ BlacksOnBlondes.com
Petra was a Czech foreign exchange student that had never seen a black dick before! When we found out that what she really enjoyed exchanging was bodily fluids, we set her up with 3 of the biggest black dicks we could find, to give her the final test, before heading back to her homeland. She had a perfect Euro style body and a pretty face, and although she spoke through an interpreter, we had no trouble understanding her intent. The dudes picked up on her enthusiasm, and cranked their games up a notch to match her intensity. Therein lies the problem, though…one of them was the fattest dick around, the humongous sized sledgehammer, who is suitably named. As it happened, when Sledge went into overdrive, he broke her pussy! Shit, now what? Petra wanted to ace her finals, so she volunteered to park her wrecked pussy, and suck each of them off, and eat their "sperma", as she called it with her thick accent. So she hit her knees and actually sucked each one off, as promised, and landed an "A" to take back home with her! 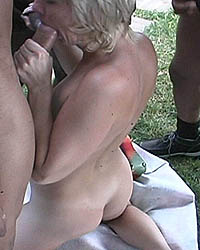 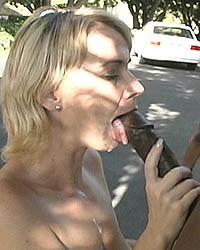